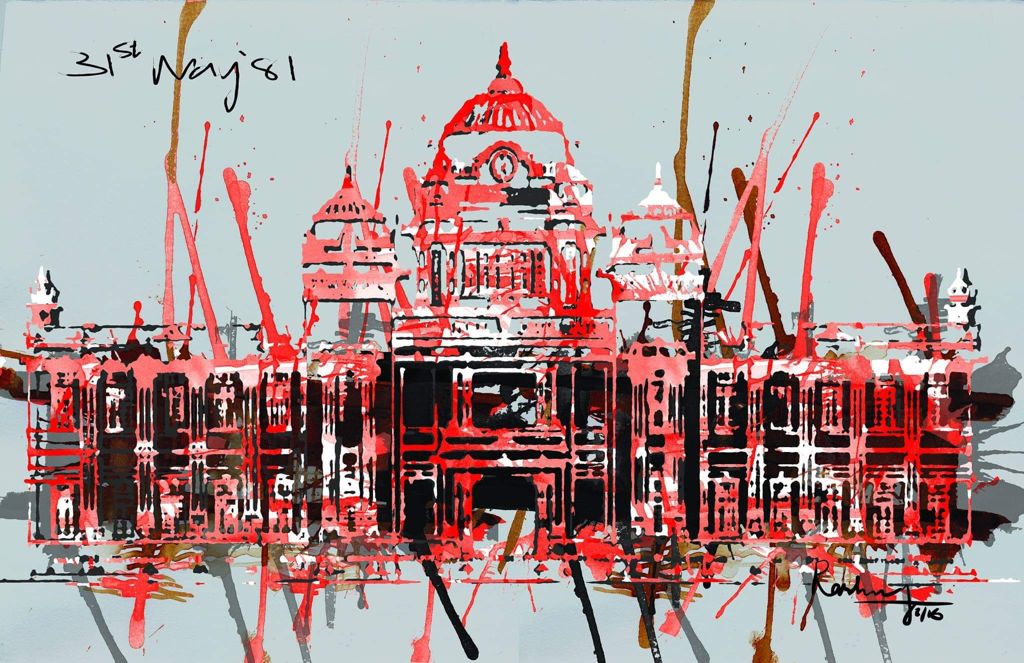 In the 1950s, Tamil scholars, led by Sam. A. Sabapathy, decided to expand the library in Jaffna on January 14th 1952 in view of the aspirations of the people of Jaffna.

Father Long brought the Librarian of India SR Ranganathan (acclaimed as the father of librarianship) to Jaffna and used his management skills in the library sector to draw up preliminary plans for the library system. His recommendation was to the let Tamil Nadu Architect K.S. Narasimman as the Architect of Jaffna Library.

In those days, due to political interference and tug-of-war, construction proceeded at a rapid pace.  In the name of the mayor’s order for political reasons in the midst of a seven – year delay, a small section in the H (H) shape of the building was shown to have been hastily constructed and completed by Dravidian architectural heritage on 11 October 1959. And it was also opened by the Chief Minister of Jaffna A.D. Thurayappa.

Even when the library was burned down in 1981, the complete architectural design of the library, designed by architect Narasimman, had not been completed.

The current misconception that the Jaffna Library is the largest library in Southeast Asia calls into question the credibility of the Tamil side’s data collection.  If the Jaffna Public Library had been fully constructed in the 1950s with a multi-story building according to its H (H) plan, it would probably have become the best library in South Asia.

The Jaffna Library, which was the second largest library in Eelam at that time, has disappeared after 40 years of burning.

When taking a look at the political background of the Jaffna library fire and the situation in Jaffna at that time Dr. Thiyagaraja, a former UNP MP and party leader from Karainagar, was shot dead by Suntharam from the PLOT organization on 24-05-1981 at the Vattukoddai West Kannagaiyamman Koviladi district during his election campaign.

In order to disrupt the district council election, all the LTTE members of the day, led by Lt. Seelan, carried out the first road blockade attack on government forces at Urumpirai Karbhakappillaiyar Koiladi on 28.05.81 at one o’clock in the morning.

At the same time, preparations for the District Development Board elections were underway in all areas. On the morning of the 28th, two youths who were doing preparatory work at the Tirunelveli Secretariat in the Nallur and were shot dead by government forces.

Tensions in Jaffna escalated as government troops set fire to the Nachimar Amman temple chariot and tower, when the PLOT Manikkandasan firing on security guards at a Tamil Liberation Alliance (TLA) election campaign rally in front of Nachimarkovil on 31-05-1981.

At this juncture, Gamini used racism to gain the upper position in a power triangular contest between Gamini Dissanayake, Lalith Athulathmudali and Premathasa.

Gamini took advantage of the collective mentality of the Sinhalese of the day that those who acted strongly against the Tamils ​​were the heroes of Sinhala.  About 150 criminals were brought from Sinhala in three buses to Jaffna on 31-05-1981 afternoon as already planned. With them was police officers on vacation and police officers in duty. Kaminidisanayake himself set fire to the Jaffna library on 31-05-1981 at 19:30 pm.

The UNP government burned the Jaffna library and carried out scientific, cultural and genocidal activities. Up to 97,000 precious treasures of Eelam, such as manuscripts and chain medical texts were burnt to ashes. And shops and offices in Jaffna were set on fire and many civilians were massacred.

The morning of 01-06-1981 is unknown. News of the library burning spread like wildfire around the world. That day was recorded in the history as the sad day and black day of Tamil Eelam.