Today is the memorial day of the first maveerar of women in LTTE – 2nd Lt. Malathy 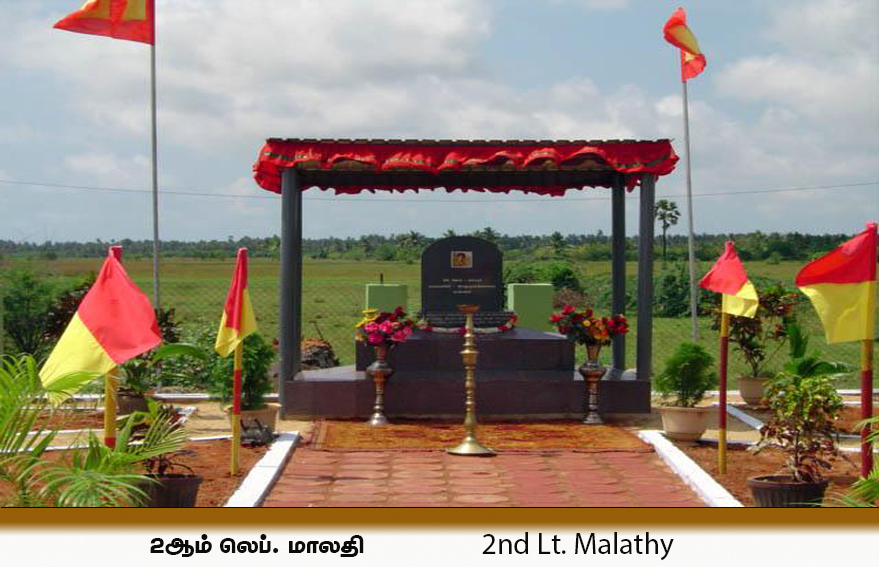 Today is the memorial day of the first maveerar of women in LTTE – 2nd Lt. Malathy

“2nd Lt. Malathy was the first root for women´s freedom. No country, no society can claim to be completely in freedom if it has not given women complete freedom.“

The night of 10.10.1987, a new history was made in Tamil Eelam. Whole Tamil Eelam was sleeping peacefully. The Indian Army, which had been sent to Tamil Eelam with the aim of destroying our liberation struggle, began to wander the dark looking for the LTTE freedom fighters. Everyone was awake with open eyes for the arrival of the enemy. It was night and the time was 1.15. Malathy was one of the women fighters standing in Koppay holding her A16. She was observing the vehicles moving down the street. 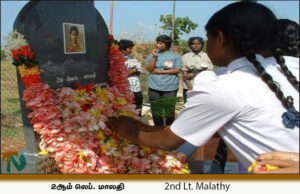 Eyes was awake in Kaythadi and Koppay. A vehicle reached Koppay and the army jumped out and started firing at the area where Malathy was. The sounds of gunfire in the battle was to write a new chapter in our history.

It was a heavy fight. The sound and the sight of bullets showed how strong the attacks were.  Malathy was standing very close to the army and carrying out the attack. Malathy was near the army now and suddenly Malathy screamed: I´m wounded. Take my weapon. Give it to our leader.” She was injured in the leg. She was still fighting even after she was wounded. Then she realized that there was too many armies. She told the other fighter to take her weapon thinking even if she became hero, her beloved weapon may not came into the hands of the enemy. Then she ingested the cyanide and died for Tamil Eelam.  She was the first female hero in the history of the LTTE struggle, 2nd Lt. Malathy. We will continue our journey along the path taken by Malathy. She loved her weapon more than her life. The nation will carry her history. 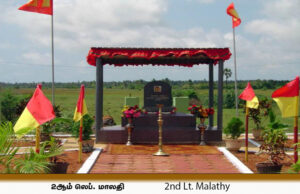 Daughter of Mannar! We will continue on your way. We are not cowards. The tigers will rise up. We will save our nation.

This is how a woman should be. The woman may be like this. She cannot do more than this. Malathy broke the idea that women are less energetic than men are. 2nd Lp. Malati proved this for 34 years ago. She showed that even a woman could do anything. She was angry when our country was under foreign occupation. She was angry seeing women being raped by the Sri Lankan Army.

All the literature, epics and myths arisen in history have had given importance to the external beauty of women and have not revealed anything about the strength of women. Happiness is high when a baby boy is born at home. Sadness will surround the house if a girl is born. This is the situation today. Why did this tragedy happen to us? Why has our minds not changed. There is so much masculine energy within a woman. Then why this discrimination in society? These questions must arise in the minds of all. The new generation has the ability to put an end to this kind of discrimination. 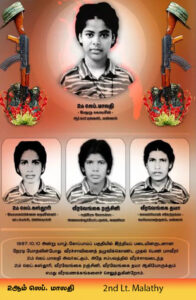 In the history of humanity, the mother society ruled the world six thousand years before Christ. It was mother´s kingdom. The mother led the group. The woman was greatly respected. Historians say that a mother became the leader. The woman had then power. The mother was willing to protect her race, feed them, find what they needed, and sacrifice herself. It was that time.

She led her own way to protect her race from enemies and wild beasts. She established a council in the village to protect everyone in the village. The woman of the day also faced the battlefields. The mother will fight. She will meet death. She will win. The women were able to climb the mountains to chase away the enemy. Those women could make sharp weapons out of stone, make tools out of leather, make utensils, build beautiful huts, and dance.

The liberation of our nation will not be possible without the participation of the number of women in the struggle. It is the opinion of the Tamil Eelam National Leader V. Prabhakaran. Our national liberation will not be complete without the liberation of women. Our society, which has subjugated women as a form of oppression, has not come forward in the development. Opinions of female oppression are still strongly spoken. Slavery in Tamil life has lasted for many years. The culture of Tamil Eelam has been shattered by foreign invasions.

In Tamil life, a woman has been respected. But the Tamils gave up everything for the foreign invasions. And this was due to the slavery of women and the bad opinions of woman.  Even today, the women´s situation is very bad in India. Due to Indian domination in Tamil Eelam, Tamil Eelam women were subjected to similar oppression.

Women’s freedom and national liberation can be made possible by gradually bringing about social change through the inclusion of women in the liberation struggle. This is how the female Tigers came into our struggle and today they are the great forces that define the enemy’s creativity. They have also revolutionized society. They are developing a new perspective on social concept. After all, our national leader Prabhakaran is proud of female fighters, claiming that female tigers live as role models to the world. According to physiologists, men and women are created with equal powers. 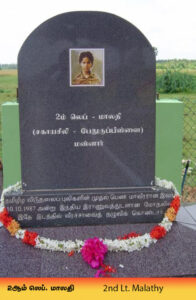 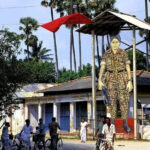 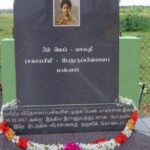 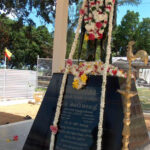 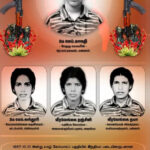 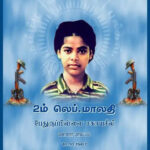 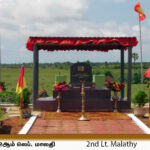 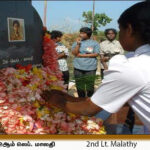