The first daughter of the Goddess Sea was our first Sea Black Tiger Captain Angaiyakkanni. 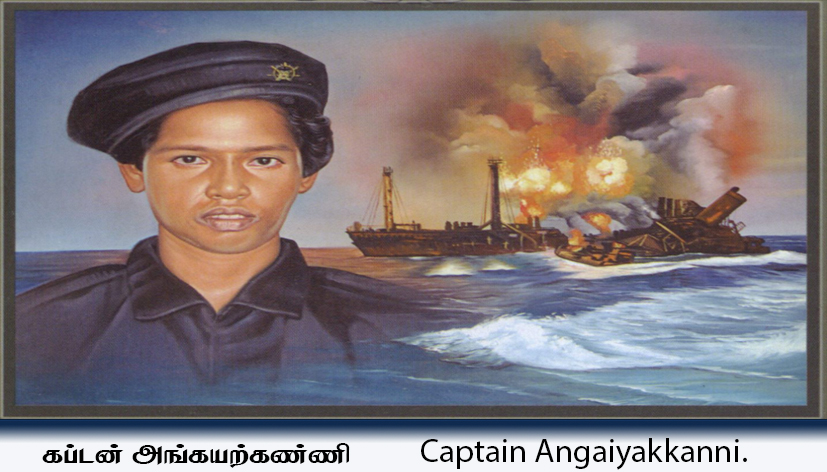 The first daughter of the Goddess Sea was our first Sea Black Tiger Captain Angaiyakkanni. The seaside, which had a close relationship with the sea, was a land of white sand. Every ordinary young woman would want to play with her friends when seeing this white sand. The hearts of female Tigers, who came to practise swimming, were melted by the tears of the poor. With sympathy, they discussed about the state of the state of these people.

Angaiyakkanni’s heart became hard. They should get the correct revenge for this.

Every time she witnessed the sorrowful state of those poor men, women and children whose lives were destroyed by the Sri Lankan Navy, she believed more strongly that her choice was correct.

She told the leader she wanted to become a black tiger. In exactly eight hours and twenty-seven minutes, Angayarkanni swam seventeen nautical miles (approximately thirty-five kilometres). The people in charge had love for her that could not be described in words.

Since the start of her Black Tiger training, she participated in it skill-fully and wholeheartedly, which satisfied everyone. No one doubted that she couldn’t hit the given target exactly.

No naval officer believed that a single person would be able to attack the Northern Headquarters ship, which was forty-five feet deep in the harbour of Kankesanthurai. The absolute truth is that they never even dreamed that anyone could accomplish this.

Angayarkanni, who trained in the third training camp of the Sea Tigers Women’s Brigade, had the quality of a leader naturally. She has been the team leader from the beginning. She came first in one of the competitions held between the female and male fighters of the Sea Tigers. She was good at sports. 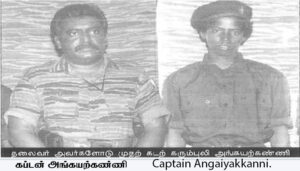 However, when living at home she had the opposite nature. She does not go out alone at night. She needs her mom’s support for anything. Her hidden personality was revealed on the day she set out to become a LTTE.

Lt. Col. Bama and Major Sukanya know her well. She has been with both of them for a long time. She was one of Lt. Col. Bama’s crew members during the historic Frog Operation.

Everyone had trust in her that she could deal with any job and any responsibility.

She had once gone home on vacation after joining the movement. Soaked in the affection shown by her mother, father and brothers, she told her brothers that you should all study well and come forward to study. It was only after losing her daughter that the loving mother was able to understand why her daughter said that.

“I looked after you like a mother hen looking after her chicks and safely bought you from Velanai,” she crie. She asks herself how her daughter was able to do such an achievement. Having lost their own home to the Sri Lankan Army in Velanai and standing as a refugee, she could only be surprised by her daughter’s bravery for a girl that would not go outside at night without her mother.

During her Sea Tiger Brigade training, she told her friends that she wanted to die during the Nallur Festival as only then her mother would have money after selling peanuts. Only then my mum will be able to provide food to the other girls when they visit on my last rituals. Apparently, she often said this. 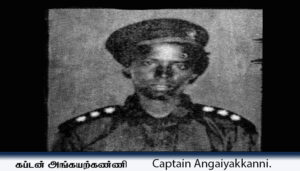 The Special Leader of the Women’s Sea Force Lt.Col Nalaayini asked Angayarkanni if she wanted to say anything. Without any hesitation, her reply came clearly.

I always want to be loved by you and Annai (Thalaivar). People that love their supervisers, their leader and their motherland more that their own mothers are Black Tigers.

‘’I will not return without hitting the target,” said Angayarkanni and said goodbye. Her movements were visible in the distance and then the others returned just staring at the waves in agony.

1994/08/16 early morning at 12.35, a great shock came to the ears of those fighters that were waiting. If civilians sleeping miles away could hear the noise, imagine the army standing in Kaankesanthurai? 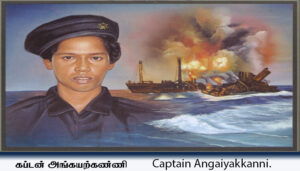 The Sri Lankan military leadership was agitated by the collapse of one of their dream forts.

‘Who knows who that child is? When will our lives change?” said people with tears in their eyes.

“Right, the command ship is out.” Everyone’s heart was filled with these memories and words of Angayarkanni. The fighters became agitated.

They kept looking at the aggressive waved in that dark again and again. They imagined the sea saying, “why are you wasting your time looking for my daughter?”

“Why are we not your children? Why have you just left us?” they thought to themselves.

However, the next instant they thought that the sea herself is who holds us.

Angayarkanni’s memories remained in their heavy hearts. Angayarkanni who had mixed with the seaside wind at Kaangesandurai bord, had mixed in the blood of every single freedom fighter. 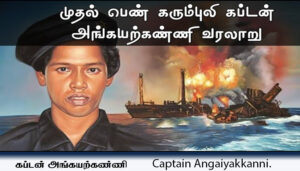 She deeply engraved herself in everyone’s hearts. She became part of the history which would be spoken about of millions of centuries in the future.

In the motivation to capture the island areas, Sri Lankan Army had taken actions to take over Velanai and la Chicken Hen saved her chicks with her wings from an eagle. Today that chick had broken one of the eagle’s legs.

The day that Col. Kittu and his friends had become martyrs as a result of the Indian army’s impact, she made herself a Tamil Tiger. Today she herself became a martyr. 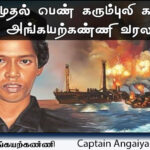 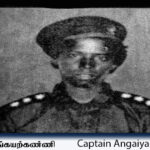 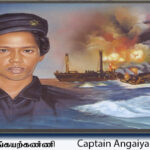 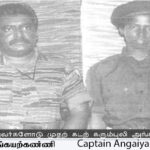