Discovery of the Tamil and Telugu Language on a Copper Charter at Mannampitiya Tamil Village. 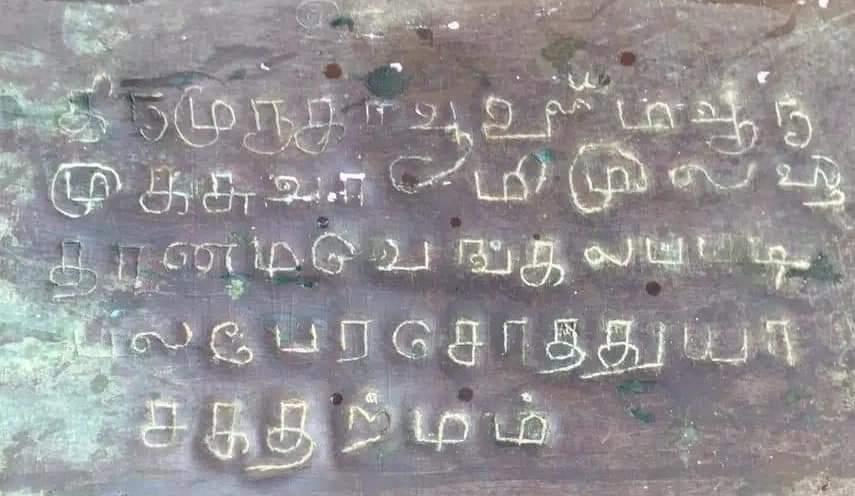 The main road between Polonnaruwa and Batticaloa is the Mannampitiya area which is a place of great historical significance. This traditional area which has been under the control of East Ceylon since the beginning of history has been related to the Polonnaruwa District for administrative convenience since the time of British rule. The boundaries of this area contain the ancient Tamil villages of Muktukkal, Samananpitiy, Thampankadavai, Karuppalai, Kandakkaadu, Sorivil Trincomalee, Kallur, and Pillaiyaradi. In the outlying areas, some of these then-inhabited villages are now abandoned fields, forests, small hills, and caves where people lived. Evidence confirmed that these villages have an ancient and continuous historical heritage. These facts are further confirmed by Hindu and Buddhist temples and temple relics found here as well. One of such ancient temples is the Chithravelayuthar Temple at Thampankadavai, which is still worshiped today. 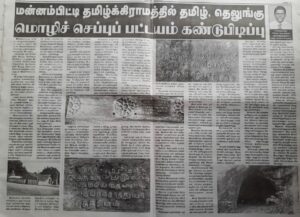 No credible evidence is available to date the appearance of this temple, however from the oral history of this area, the temple was once a non-traditional temple-village. The temple, which had the Vel symbol, can be traced back to the fact that this temple has grown into a stone temple built by the Agama tradition over time. The structure of the temple has been further expanded in recent times and is now being rebuilt as the largest temple in this area. The buildings of the older temples and some of its monuments found during the reconstruction will not be kept in the new temple but will be preserved in one section of the temple. One of these structures is a decorative pillar with a copper charter placed at the base of the old temple. In this case, the archeological and historical monuments found in the Mannampitiya area are being searched and recorded by historical activists of the area. Mr. Nakuleswaran Pravin sent me a photocopy of the copper chater found in this temple by Mrs. Umachandraa Pragash, the former Head of Shakthi Radio.

This copper charter is mounted on a pillar about five feet long. The semicircular lotus shape at the beginning and end of the pillar is engraved. The charter consists of Telugu to the right and Tamil to the left and a full-length lotus carving in the middle of the pillar.

The charter in Tamil is written in the vernacular of that time and is states the following:

Professors who are proficient in the language were sent the charter written in Telugu and Tamil to Prof. P. Supparayalu, Ragupathi and Dr. S. Rajagopal to read and translate.

All three professors have confirmed that the message conveyed in the Tamil charter was mostly written in Telugu in accordance with the vernacular of the time. Its text reads as follows:

Different bilingual charters tell the story of many people coming together to donate what they had received or sacrificed to set up a bronze staircase in Innersantum (Moolathaanam) in Santtorum (Garbhagriha) of Chitravelayuthar temple at Thampankaduvai. Professor Ragupathy believes that the date of writing this charter may have been as early as the 18th century or 19th century since they were written in Tamil without being dotted in initial and subsequent scripts. Evidence suggests that some of the inscriptions in the history of the Batticaloa temples were engraved during this period. They were mostly written in Tamil, but the fact that the Thambankadavai Chithravelayuthar temple was written in Tamil as well as Telugu on the Copper charter (Cheppupattayam) is seen as new historical news. The reasons for this must be looked at historically. 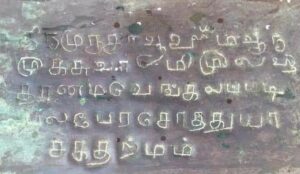 Since the 15th century, Batticaloa has been a region largely dominated by Kandy. The domain of this prince’s regime extended to the borders of Anuradhapura,Polonnaruwa. Srivijayarajasingan (1739-1747), Keerthi Srirajasingan (1747-1782), Rajathirajasingan 1782-1798) and Srivikrama Rajasingan (1798-1815) ruled this dynasty after the last Sinhala king of Sriviraparakrama Narendra Singhan which Belonged to the Madurai Nayaka dynasty .Although their official language is Tamil, the mother tongue of these rulers and officials is Telugu. Thus, it can be said that the Thambankadavai Chitra Velayauthar Temple may have been built in bronze Cheppupattayam (staircase) due to the contribution of these officials. But it does not seem appropriate to associate this task with the rulers of Kandy, as the copper plates in the temple are said to have been made of bronze charter (pattayam) with the financial help of many people who had gathered alms.

There is evidence that people with Telugu as their mother tongue lived in Sri Lanka before the Kandy Kingdom. There is ample evidence of a co-inhabitation of Indigenous Tamil soldiers as well as coveted soldiers, especially in the regiments of the Jaffna Kingdom.  Among them, the South Indian Kannada and Telugu veteran solidiers were the most notable. Following the fall of the regime, a section of these solidiers remained permanently here as Tamil-speaking people.  Some of them, along with native Tamils, have been working overseers as priests and garland builders in some of the temples in northern Sri Lanka under the name Bandaram.  They are known as a separate community called Kovil (Temple) Bandaram.  Although their descendants are now mixed with Tamil communities in terms of language, they can be seen living in some towns of Jaffna with some distinctive features of their own culture.  This also applies to the East of Srilanka.

The origins of the historic temples of Batticaloa in the East, especially the religious beliefs, worship traditions, and rituals of these people have some unique features. The Basupada religion that originated here has an ancient and continuous history. Non-Brahmins have worshiped in these temples for a long time. The Koneswarar inscription is the best evidence to show this. The administers and supervisors of these temples here are commonly known as Vannakkar. The Brahmi pottery charcoal recently discovered in Batticaloa confirms that this tradition originated and developed 2200 years ago from here. In this case, the original book Batticaloa Prehistory mentions Bandaram as one of the communities that worked in this temple.  It is possible that there were people who spoke Telugu here as their mother tongue, however more studies need to be carried out to confirm it. There is some evidence that some Telugu-speaking communities have been living in this area for a long time as well.

Oral history of Batticaloa relates to some of the ancient temples that originated in the area and the Veder (Hunters) or tribal people who lived there.  While a section of these people, who have long lived away from other communities in forests, mountains, and natural caves, have migrated to cities for fear of more recent wars while others continue to live in their native places. Professor K. Kugapalan, who recently researched in detail the unique biological features of these people here, sent the many words uttered in this spoken Tamil language to scholars from Tamil Nadu, Prof. Y. Subbarayalu and Vijaya Venugopal, for understanding. It is noteworthy here that the two scholars who have studied the language record in detail have identified that most of the words in this language are also found in Telugu.

In the year 2017, we carried out research in areas like Vagarai in Batticaloa where these tribal people live; these people lived in small huts and caves. The ancient settlements and fields in Mannampitiya Thambankaduvai where most Tamils ​​live have long been abandoned in recent times. These areas are now currently forests, mountains, and caves.  There is also evidence of some artificial alterations in these caves for the existence of indigenous peoples.

It is known that some families belonging to that community are still living today. Thus, their mother tongue may have been Telugu. In this historical context, the Telugu language charter was found in Chithravelayuthar Temple along with the indigenous people who live here. There are also other places for further research is to help confirm this view. 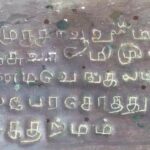 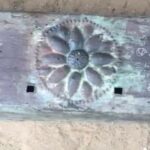 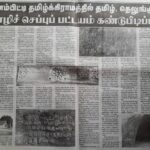