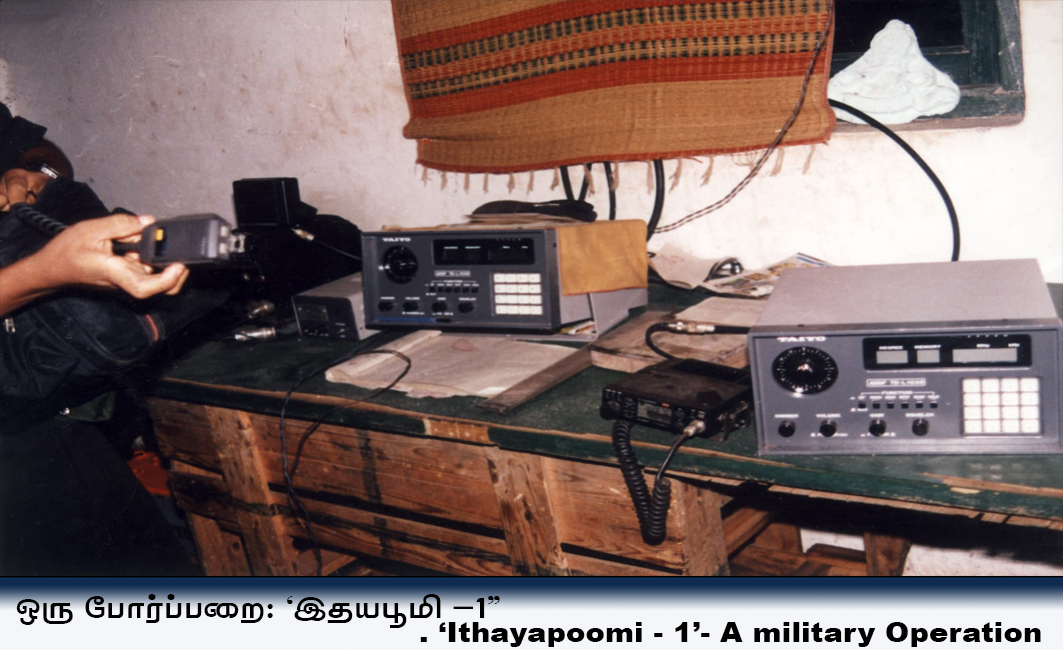 Manalaaru connects the North and the South.
The land that did not allow the liberation war to fall to the violent hunger of India.
The land that kept a leader full of determination, sacrifice, heroism and wisdom for the Tamil people.

The land that gave many new freedom fighters.

The land that gave rise to many achievements in the Tamil Eelam Liberation War.
The land that became the life-giving medium for the war in southern Tamil Eelam.
The land with rich in marine, land and forest resources.

No one can deny that the field, the site, the rich sand is the heartland of Tamil Eelam. The name “Ithayapoomi” (Heartland) is suitable for the action of these freedom fighters who taught a lesson to the enemy who wanted to set foot in the heart. 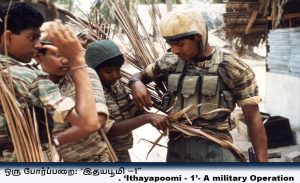 The achievements and lessons established in this operation, which liberated nearly seven miles of territory from the army, are full of heartfelt memories of martyrdom and heartfelt fulfillment. The operation “Ithayapoomi” is a new history of the Tamil Eelam Liberation War. It is full of achievement, lesson, completion and memory.

The Mankindi (Janakapura) army camp and the two mini army camps were wiped out in just thirty minutes. It is noteworthy that along with the LTTE, specially trained fighters units of the LTTE also participated in the operation.

This hill is located in the center of the road leading from Kokkuththoduvaai village to Munthirikaikulam.

Sri Lanka has established a military fence on this road to divide North and South Tamil Eelam. A huge army camp was set up at Mankindi Hill to prevent this military fence from being cut down.

It also set up a planned Sinhala settlement around the military camp. Apart from that, it also got the Sinhala name “Janakapura”. 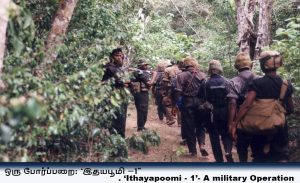 Not only did the Mankindi Army Camp become the main base for the Kokkuththoduvaai and Kottakkeni troops, they also turned it into a shelling base for other Tamil villages in the Manalaaru.

Some planned military operations were carried out in the Manalaaru from the same army camp. The Sri Lankan government and the military miscalculated that such a strong military barrier could prevent the LTTE from moving from North to South and from South to North.

The government used these military camps to set up voluntary settlements in the Kokkuththodvaai, Kokkilaai and Thennamaravaadi areas.

They also wanted to capture the sea of Manalaaru, the land and forest resources. As an expression of this thought, the village of Alampil was transformed into a massive army camp. But they retreated, unable to retain the camp.

They attempt to land several times by sea in the Naayaathru area. They were unsuccessful. All of these are historical lessons that have been lost in the thought of depleting the marine resources of Manalaaru.

Operations like “Hayasena”, “Minnal”, and “Hayabara” were massive operations aimed at capturing the Manalaru forest and the LTTE’s strongholds there. From time to time, they suffered systematic defeats and lost even modern artillery.

These are all bitter truths that the Sinhala state and the military have learned in the past. During these bitter operations they tried to expel the Tamil people from the Manalaaru and to divide the north-south Tamil Eelam, and to set up planned Sinhala settlements – to reclaim marine and forest resources in Manalaaru. 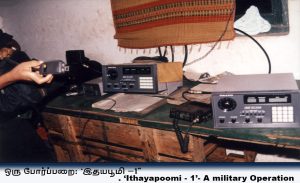 The Mankindi Army Camp was heavily used to maintain the Kokkuththoduvaai, Kottakkeni and Sampankula army camps and to attack and destroy the LTTE strongholds.

It is an indisputable fact that the thinking and action of the Sinhala state has been devastated by the operation”‘Ithayapoomi – 1”.

Emotions of the operation “Ithayapoomi – 1”

The successful attack on the army at Tirunelveli on Monday, July 23, 1983, drew the attention of the world attention to the LTTE’s ideal war.

On Monday, July 5, 1987, Miller’s Black Tiger Attack brought the Sri Lankan Army and Government to the brink of collapse and made them seeking help from India.

The world was overwhelmed when the LTTE stood bravely against the mighty Indian Army. Foreign radios such as “Veritas” predicted India’s defeat, with the United States as Vietnam, Russia as Afghanistan and India as Tamil Eelam.

The focus was once again on Tamil Eelam and the LTTE after the capturing of Kokkaavil, Kondachchi, Koodday and Maankulam army camps by the LTTE.

The Elephant Pass War showed the idea of “two military on the island of Sri Lanka”. Thirty minutes into the action, the LTTE destroyed the central military base in Mankindi. This  not only attracted the attention of the world press and radio, but also pushed the Sri Lankan government back to seeking global help. 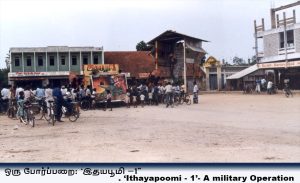 “The LTTE is weak and is seeking a ceasefire-negotiation.” The dream of the Sri Lankan government has been shattered by the operation “Ithayapoomi – 1”.  The idea of the military and the government that the north-east could be cut off by Sinhala settlements and military camps has been shattered.

Sinhalese people have refused to settle in the settlements relying on the military.
The incorrect decision that the restriction could weaken the liberation struggle has been distorted.

Sadness and bitterness have erupted between the government and the military commanders.

The Mankindi Army Camp was used as a command headquarters for seven military operations. The demolition of the base, which was the foothold of all the army commanders, has shattered the confidence of the army commanders and soldiers. On the contrary, the speed and determination of the LTTE have been encouraged. 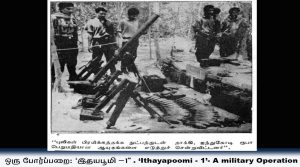 World newspapers have been reporting about the attack and the real development of the LTTE. The Sri Lankan president established an immediate appointment of a high-level military commission to investigate the attack. They have been relentlessly exploring by the operation “Ithayapoomi – 1”.

In the three-year development of the paramilitary

On March 21, 1984, the Sinhala government declared Manalaaru of Mullaitheevu district a no-go zone. The people evicted on that day have not been resettled to date. Instead, the Sri Lankan army settle the Sinhalese population in the area.

The incoming providing from foreign aid to displaced Tamil people are giving to the Sinhalese settlers in the area. 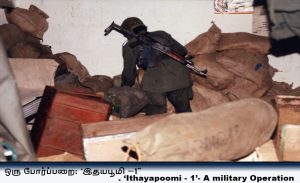 Tamil people from Mullaitheevu villages were removed during the Mullaitheevu military operation. For three years, the Sinhala government did not think about the plight of the Tamil people. On the other hand, people’s homes, schools, places of worship and hospitals were targeted by the Air Force in Manalaaru in Mullaitheevu.

The Liberation Tigers of Tamil Eelam (LTTE) established a division in the early 1990s due to the oppression of the Tamil people on Manalaaru by the Sinhala government. To protect themselves and to freely live their life on their own land. All the villagers of Mullaitheevu and Manalaaru area joined the division.

Many villages were resettled on their land with the support of the LTTE. With self-defense training, this division developed.

In the middle of 1991, this division had reached the second phase of their growth. Specially trained 303 type rifle, became LDS gun group. When the LTTE thwarted massive operations by the Sinhala army in Manalaaru in the early of 1993, this special division supported the LTTE offensive in many ways. Three fighters of this special division became maveerar.

The Mullaitheevu district special division were directly involved in assisting the LTTE in the special operation “Ithayapoomi – 1”. This operation instilled hope in the minds of the people of Tamil Eelam and destabilized the Sri Lankan state and the Sri Lankan military. 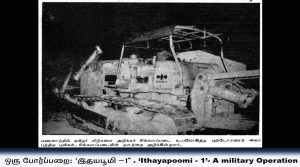 This was a new turning in the history of the liberation struggle. This was also the beginning of the hope that people will be able to reclaim their land. In the past years, Tamil people feared the Sri Lankan military. Today the situation changed and they bravely said, “Enemy! If you want your life, do not step on our land.”

The release of the prisoners

The LTTE unconditionally released seven Sinhalese civilians who confusingly had been refuged wrongly during operation “Ithayapoomi – 1.” Southern newspapers commented on the release with surprise. But there is nothing surprising in this.
The Sri Lankan government has settled the poor Sinhalese people in Manalaaru as armed men, and imposed the misconception that the Tamils are against the Sinhalese. They were armed with racist views in military camps.

The LTTE could have killed them, based on the fact that they were armed settlers. But why did they not they do this? Everyone needs to realize the reason why they were not detained as prisoners. 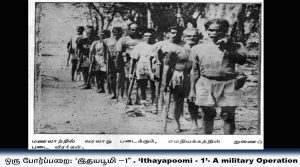 These are people who came and settled down by lust and deception. They also lost faith in their military. They saw the cowardice of their military when they fled without helping them. These people realized the fact that they had been deceived and settled so far and took refuge with the LTTE.

The goal of the LTTE is not killing the civilians. Not only that, the heroism of the Tamils is to protect the asylum seekers. The Sinhalese people are not our enemies. We love them. Based on this policy following Sinhalese people were releasedby the LTTE: Nandasiri, Nandasirikus Tamayanti, Nandasiri Dinesasinghe, Yanthulangani, Surasena Vimalavathi, Chinthaka Jematha and Saman.