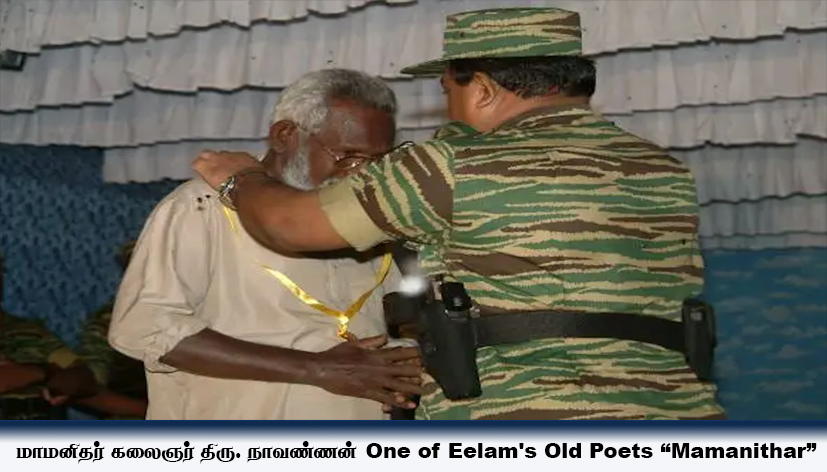 The Tamil Eelam National Leader honoured the artist Mr. Navanan with the Mamanithar Award. The patriotism of his motherland remains in Tamil Eelam and in the hearts of every Tamil. Some poets will be mere poets, only looking out for themselves and their families ensuring their safety during the struggle for freedom, but Navanan was different. Poet Navanan expressed the impressions of the struggle through his writing, speech, painting and sculpture. He produced and presented special programs including Tamilan, Sinthiya Ratham, Karum Pulihal Kavyam, Inimai Tamil, Eramudhu. He has also held a special place for himself in the arena. ‘Vali Yum Pali Yum’, a magnum opus produced by Navanan, is considered important. He also published various books while publishing the epic ‘Karum Pulihal kavyam’ prepared by LTTE members. 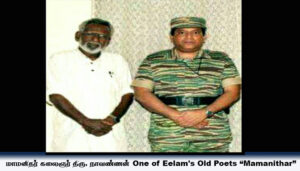 As well as painting and sculpture, he also worked in photography in his final days. He was honoured twice by the Tamil Eelam National Leader with Gold Medal. He was born in Mannar district in 1948 and spent his youth in Jaffna. He started at a young age. In 1998, he was honoured for his outstanding performance in the voice of the Tigers, and after that, he was honoured for the second time for his activities such as poetry book creation, art and literature. Since the beginning of the armed struggle in this land, he started writing with his pen to strengthen the struggle. Navanan, who emerged as a poet, wrote his lines in the form of poems, songs and jokes to keep the flame of liberation burning within our people. He came to Vanni due to the invasion of the Jaffna Peninsula and helped the LTTE forces create a new history by driving away the enemy’s army in Vanni. He is the one who strived hard to record the sacrifices made by our warriors, people – accomplishments – losses they faced.

For that, he wandered day and night from town to town, slept in huts and beaches, and made their lives his own and painted their feelings. Also, he will fight to record the memos not only in paper but also on audio tapes and CDs.

As a painter, sculptor and novelist he documented his feelings in various forms. 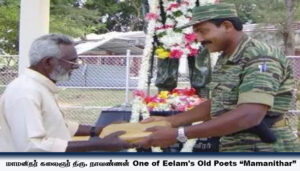 Lt. Kaviazhagan (Real name Susainayagam Kingsley Udayan) was the only son of five children in his family who was united with the fate of our country. Kaviazhagan joined the struggle for freedom, fought till the end and became a hero. Poet Navanan in his old age, he was an active presenter for Voice of Tigers, a channel was being broadcasted on the radio. He fed various events to the world through his energy on Tamil Eelam National Television. He received two awards from our National Leader Honourable Prabhakaran for his work. In the end, he wrote a book called “Traces of the Tsunami” remembering his relations which were destroyed by the fury of nature. Thus the loss of him, who kept every event on record, is devastating to treasuring the Tamil Heritage.

Poet Navanan is a noble man who united his life with the cycle of time and always left memories through his work. Not only him but even his only son lived his father’s wishes and died for the motherland. He is a poet who wrote many heroic songs and carried feelings for us. Son of Mamanithar Navannan, Lt. Kaviazhagan (Soosainayagam Kingsili Udayan) martyred on 16-05-1997 in Vavuniya Nedungeni in Samar against Jayasikkuru operation. 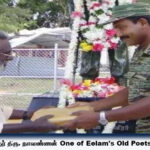 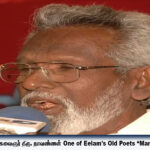 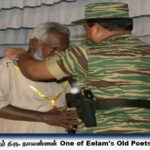 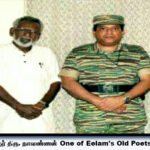