The Sinhala dynasty rejected the ancestors of Eelam Tamils.

The Sinhala-Indian epics such as Ramayana and the Mahabharata, were rejected by the ancestors as Eelam Tamils, as these books were written in the Balli language called the Mahavamsa.

The Mahavamsam states that Vijayan was the founder of the Sinhala dynasty in Sri Lanka. the first Sinhala king of Sri Lanka. The Mahavamsa states the story of Vijayan. The regions of Bengal and Orissa in northern India were once called “Lala Desam”. The king who ruled this kingdom was named Singapaku, and he was born to a lion and a princess! After discovering his truthful origin, he found his father (the lion) in a cave and beheaded him. The king who ruled this kingdom was named Singapaku. He married a woman named Sigasivali and made her his queen. He had 32 children, 16 of whom her twins. The eldest of these children was Vijayan, and Singapaku appointed him as the crowned prince.

Vijayan was very cruel. The people complained to the king about the atrocities he committed. Singapaku tried to correct his son, but Vijayan did not change his ways. Together with his friends, he continued to harass people. The people appealed again to the emperor because his atrocities had gone out of bounds. They demanded a “death sentence” for Vijayan, so Singapaku deported his son to another country with three ships.

Vijayan and his 700 friends left the ships and set foot on the island of Sri Lanka. This event dates back to 543 BC.

The place where Vijayan landed had beautiful scenery. Underneath a tree nearby, a woman named Kuveni sat. The Mahavamsa describes Kuveni as a demon, just as Ravana was said to be a demon who ruled Sri Lanka. She belonged to tribes inhabited by several Eyakka (demons). The word Kuveni is a variant of the Tamil word Kavini. “Kavini” means, the one who created the apocalypse. She offered refuge for Vijayan and his friends.

The two fell in love and married, soon having a son and daughter. Vijayan’s 700 friends built them many cities and villages in the new land and asked Vijayan to become the ruler of a kingdom that includes these areas. Vijayan however refused. “I can only ascend the throne if I marry a princess from the royal family,” he said. So vijyan’s friends went to Madras and met with royalty from the kingdom of Pandian. They offered them plenty of gifts like pearls and gold. They asked if their king Vijayan could marry their  princess. The King of Pandian accepted this offer to marry off his daugther to Vijayan.

Vijayan was very happy to know that the Pandian princess was willing to come to Sri Lanka to marry him. He called Kuveni and said, “I am going to marry the Pandyan princess. Hand over my two children to me and leave these lands.” The descendants of the two became the hunters who made up the tribes of Sri Lanka. Vijayan, who married the Pandya princess, ended up marrying 700 women who came with her that were ministers. Vijayan, who was previously ruthless and rude, turned good and ruled Sri Lanka without fail for 38 years. His descendants are the Sinhalese as stated in the Mahavamsa. 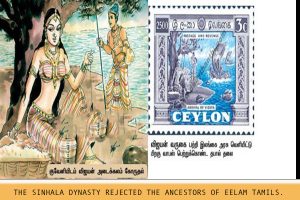 In 1956, the Sri Lankan government issued a special postage stamp entitled “Vijayan’s Arrival”. The notion that he came to Sri Lanka from India is not accepted, however. Besides, to say that there was a Tamil woman named Kuveni here when Vijayan came, would be like admitting that the aborigines of Sri Lanka are in fact Tamils. Therefore, this stamp would have been withdrawn. Because of this fact, the Government of Sri Lanka withdrew the stamp. But by then, the stamp had spread across the world.