The Sinhala government showed racism even in the Tsunami 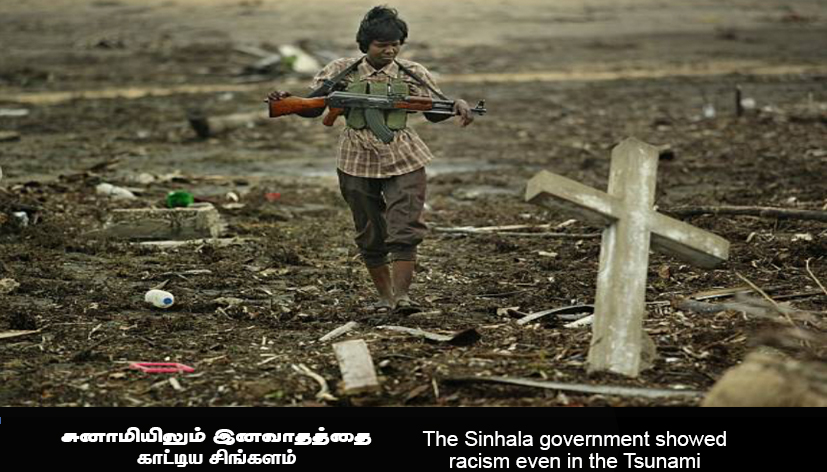 The Sinhala government showed racism even in the Tsunami – The LTTE acted without racial prejudice.

The international community is weighing the actions of Tamileelam Nation leader V. Prabhakaran and the President of Sri Lanka Chandrika after the tsunami disaster to compare and evaluate the leadership abilities and qualities between them. Since the national leader Prabhakaran made a statement expressing his sympathy to all the Tamil-Muslim-Sinhalese people who died in the disaster, he had taken a noble humanitarian stand by generally supporting of all the victims that the relief aid should be distributed without ethnic discrimination.

Today it has become a common perception that it was the LTTE movement in this region that responded so quickly and responsibly in the rescue operations as soon as the tide subsided. Chandrika and the Sinhala party have accepted this fact so unanimously. The national leader had ordered the LTTE marines, police members, fighters and volunteers of humanitarian aid organizations including the Tamil Rehabilitation Association to immediately go into the field and engage in rescue operations.

Even the foreign journalists were amazed and praised that the LTTE movement itself has accomplished such a wonderful emergency rescue work. The people remember with gratitude the LTTE fighters who came to rescue them even at the risk of their lives. The LTTE did not commit the petty act of injecting ethnic politics into the tsunami disaster like the Sinhalese government.

LTTE did not engage in the politics of propagandizing and extolling natural disasters, even when large numbers of soldiers were killed. Also, the LTTE movement acted with political civility without embarrassing the world leaders when the Sinhalese government did not allow them to visit the devastated areas in Mullaitheevu. 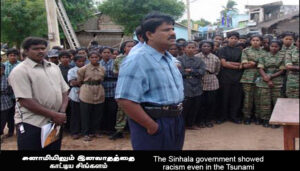 At the same time, when the Sinhalese people were greatly affected by the massive floods in South Lanka last year, the world was also observing the humanitarian action of the LTTE movement that helped the Sinhalese people by going there with relief goods. In this way, the world community will know that the LTTE movement has behaved characteristically by maintaining political civility and humanitarian stand whenever the need arises and whenever crises occur at the national level.

The world community considered that all these were the political manifestations of the great leadership, personality and noble qualities of Tamil Eelam national leader V. Prabhakaran. However, the President of Sri Lanka, Chandrika has been carrying out a political activity that is contrary to this even during this mid-term crisis.

The media has accused the government of not properly carrying out immediate rescue operations in government-controlled areas. The world media opined that the lack of personality of the head of state and the resulting imbalance of the state are the main reasons for this inefficiency. 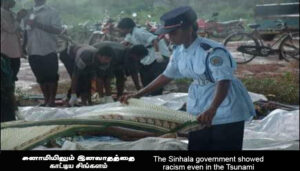 The Sinhalese officer who is the chief minister of Amparai district did not take any action despite the disaster. The reason for his neglect was that the Sinhalese people were not affected in Amparai. Because of intense pressure from Muslim politicians in this regard, a Muslim officer was appointed as the Additional Governor of Amparai.  Under his leadership, Interim works of the government are carried out in Amparai. Chandrika did not take any action against the Sinhalese officer in such a national calamity when he inhumanely showed his racist sentiments in action. It is clear that this shows the racist sentiments of the President Chandrika. 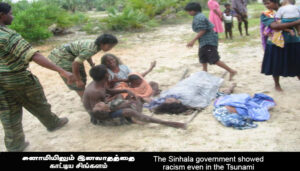 It was the same situation in Trincomalee district. Government relief was racially defined.  Relief supplies to the Tamils ​​were intercepted and diverted by the army – JVP – Sinhalese quacks.  Chandrika´s government has not taken any legal action against such crimes. At the same time, it is important to say that the Sinhalese people who lived near the coastal areas of the Eastern Province behaved humanely in these rescue operations and relief efforts.

When the tsunami hit the island of Sri Lanka, the northern and eastern states, the homeland of the Tamils, were heavily affected.  Denying even this fact, Chandrika told the media that South Sri Lanka was the most affected. She even failed to distribute the relief materials provided by the world nations equally to the affected people. Even during this natural disaster, she has shown her racist behavior by dividing Sinhalese and Tamils.

At this tragic time when more than thirty thousand people were killed – lakhs of people lost their homes – and billions of rupees were destroyed, Chandrika was exaggerating the losses by the LTTE movement. The Sinhalese government is playing dirty politics by expressing its chauvinistic desires that the sea fighters are dead and the national leader Prabhakaran is dead. 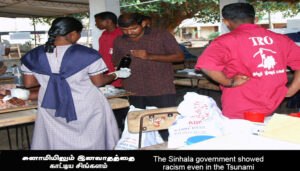 Chandrika had announced that 15 cities would be reconstructed with the financial assistance of international countries. Not even one of them has been assigned to Mullaitheevu district or Jaffna district. Chandrika has engaged in inhumane politics by avoiding world leaders to made a humanitarian trip to the Vanni region. The world community closely watches all these. How can the Tamil people get their political rights peacefully from such a barbaric minded regime!?  The world community would have realized that.

The world community has observed the fact that on the one hand, a leadership with national personality and efficiency is working, while on the other hand, a half-baked leadership with a sense of racism and laziness is working in Sri Lanka. 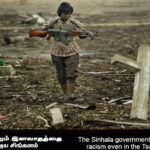 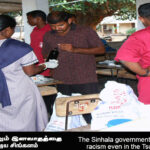 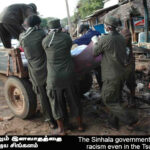 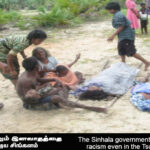 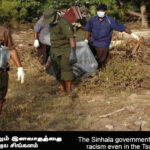 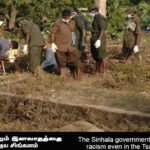 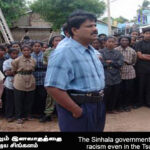 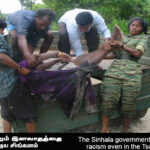 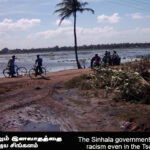