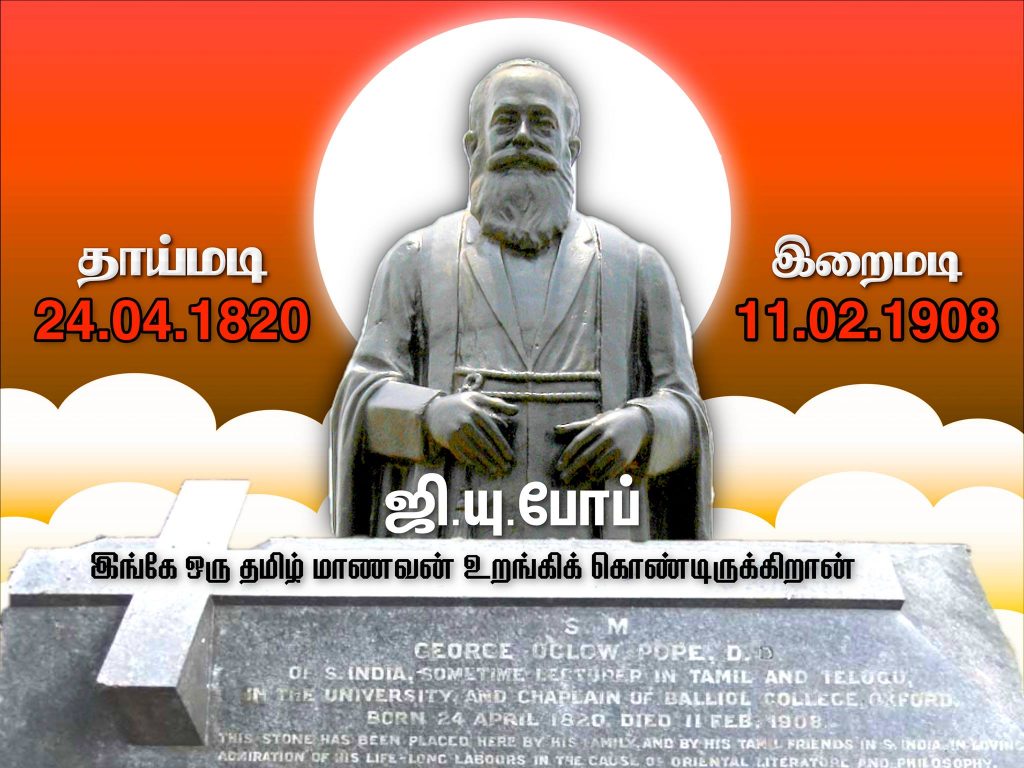 Pope was born on Prince Edward Island in Canada to John Pope and Catherine Euglo Pope. George Uglo is the Pope’s given name. [ family had gone to Edward Island for their father’s business, and returned with the family to England in 1826 during the Pope’s childhood.  He attended Hoxton College until he was 19 years old.

From 1885 to 1908 he was Professor of Tamil and Telugu at a University of England. Translated into English in 1886. He published books such as Purapporul Venpa Malai, Purananuru and Thiruvarutpayan. He was very fond of Tamil and translated Naladiyar and Thiruvasakam into English.

He came to Tamil Nadu in 1839 to do religious work with the Biblical Centenary . He learned Tamil well within eight months of sailing.

Pope came to Chennai and stayed in the Santom area. The Pope came to Chennai on behalf of the Wesleyan Society and joined the Church of England in Chennai. There he received the title of ‘Guru’. S. B. He was accepted as a volunteer for the evangelical organization G. Out of fear, he was sent to Sayarpuram for religious service.

He stayed in Sayarpuram near Thoothukudi and learned Tamil grammar from Ariyanka’s son, Ramanuja Kavirayar . Nammazhvar, from the nearby village of Senthiyambalam, befriended the Pope and changed his name to Gnana Sikamani. So he named an elementary school Pope. Apart from Tamil, he also chose to learn Telugu and Sanskrit .

Pope married in 1849 and then moved to England.

In 1851 he returned to Tamil Nadu with his wife. He continued his religious work in Thanjavur for eight years. During this time he studied Purananuru, Nannul, Thiruvasakam and Naladiyar. He also wrote research articles on Tamil in some English language magazines.

After converting to Christianity in Thanjavur, those who were considered to belong to the upper caste who did not forget the caste ups and downs asked themselves first. The Pope said that all are equal in the presence of the Lord. His opinion was not accepted by Ketto in the first place. As the evangelical church also relied on members of the upper classes, the pope withdrew from his 16-year evangelical mission and traveled by chariot for 24 days with his wife and five people from Tanjore without sufficient material, with the intention of serving the church privately without the material support of the Christian denominations.

He sat as a teacher and taught European students in Udagai, and later built the best school in Udagai, where he met European convicts who had been imprisoned. He was constantly learning old Tamil books. He searched and collected old manuscripts.

In 1871 he moved to Bangalore due to some circumstances and studied and practiced religion there. He returned to England in 1882 due to ill health there.